On a global scale, the costs to control the plague and the production losses it has caused amount to US$ 5 billion every year. Fifty percent of pesticides used in China and India look to control this plague.

Silvana Paula-Moraes, the researcher who identified the plague in Brazil, provides us with an overview of the effects.

Throughout different regions of Brazil, the Helicoverpa armigera has caused a great deal of damage to producers of grains, vegetables and citrus crops. It managed to wipe out soy and cotton fields in the Western area of Bahia and Mato Grosso. Estimated losses during the last two seasons have gone up to US$ 441.000 in cotton and soy plantations.

Estimates conclude that this plague could potentially cause more losses in cotton fields than the boll weevil (Anthonomus grandis Boheman).

What is Helicoverpa armigera??
This is a polyphagous and adaptive pest that currently attacks several crops like soy, cotton, maize, common beans, chick peas, flax, sunflower, winter grains, citrus, wheat, barley, oats and sorghum. In consequence, an A1 emergency quarantine was ordered, which consists on declaring this pest a high risk plague due to the economic damages it can generate.

This organism is originally from Africa and it currently threatens crops in Asia, Europe and Oceania. It was identified in South America in February of 2013 by researchers from the Brazilian Agriculture and Livestock Research Company (Embrapa); Silvana Paula-Moraes and Alexandre Specht from Embrapa Cerrados and by Daniel Ricardo Sosa-Gomez from Embrapa Soybean, through morphological and DNA analyses in male adults. Some hypotheses state that this pest arrived from Europe on a flower shipment through Argentina; others mention the possibility of bioterrorism. Important characteristics found concerning this plague are a high level of resistance to insecticides, high mobility and an elevated reproduction rate with females laying 1000 to 1500 eggs. 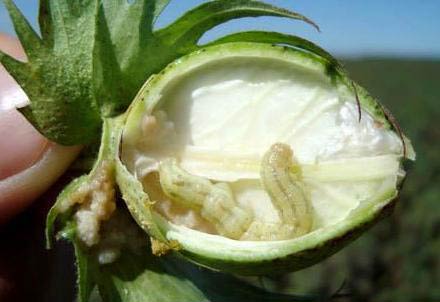 This species is physically similar to Helicoverpa gelotopoeon (Dyar), found in southern Latin America (Argentina, Chile, Uruguay, Paraguay and Brazil), which is why it can be easily confused.

¿What is the life cycle of the Helicoverpa armigera?

The organism’s life cycle depends on the temperature, which under optimum conditions would be 35-40 days/cycle, which figures out to be 3 to 4 generations per crop cycle.

In its adult form it has the appearance of a moth, with a 35 to 40 mm wide wing span, a yellow color on its first set of wings and a dark spot that is partly visible. The second set of wings is a lighter color with a large, dark distal stripe. This is a migratory species with great capacity for flight.
The female deposits its eggs in an isolated manner near cocoons, flowers or fruit and on leaves. It is capable of laying 1000 to 1500 eggs per cycle. The eggs are white and they turn a chestnut color during development.

The worm or caterpillar has between 5 and 6 stages of development. Its coloration is generally variable, and it is recognizable for dark green stripes on its back and other lighter stripes as well as black bristles scattered throughout its body with a dark rounded base. It mostly feeds off of fruit, leaves, sprouts and flowers. Maturity is complete in 3 to 20 days depending on temperature. Development time of immature phases may vary from 26.6 days when developed in maize and 35.1 days in tomato.

Once the larvae stage is complete, the chrysalis caterpillar is found on the ground, in a soil filled cocoon at 5 cm from the surface and goes into diapause (an interruption in development) induced by short days (11 to 14 hours of daylight per day) until the appearance of favorable conditions.

What kinds of tools can be used to fight Helicoverpa armigera? Which technology is being used (protection, biotechnology, genetic improvement)?

A group of specialists within the field of entomology from Embrapa created a document, taking into consideration different aspects of integrated plague management (MIP, for its acronym in Spanish) cited in literature which need to be evaluated for Brazilian conditions.

In the case of chemical controls, the most appropriate alternative to control H. armigera is to adopt a system to monitor the plague and the level of pesticide control in order to make a proper decision. A direct egg and first instar (stage) caterpillar count is recommended for cotton crops in Australia, as often as two times per week at the beginning of the plant’s germination and until 30 or 40% of the plants show open buds. According to Embrapa, chemical pesticides should be used at the following levels of action.

A regional approach is suggested for the management of Helicoverpa armigera, taking into consideration the number of generations, migration capacity and its highly polyphagous quality.

These are some of the tools that farmers can use to control Helicoverpa: