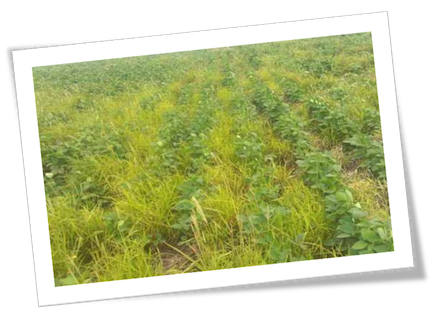 What are weeds?
They are plant species that are highly adapted to the environment; they grow naturally in human-controlled areas, and have a high dispersion and germination power. These plants grow aggressively and prevent the normal development of the cultivated species, causing important yield loses as they compete with light and nutrients.

What is the difference between resistant and tolerant weeds?
According to the Herbicide Resistance Action Committee (HRAC), the definition of resistance is "the natural and heritable ability of some biotypes of weeds in a given population to survive a herbicide treatment, which otherwise should effectively control the population in normal use conditions". The advance of resistance results from the selection pressure exerted in the population of plants, due to the repeated use of the same herbicide or herbicides of the same mechanism of action, i.e., by poor agronomic practices.

What is the setting of resistant weeds?
The lack of monitoring and the misuse of herbicides, reveal the fact that some species of weeds have become a growing problem. The indiscriminate use of herbicides of a particular mode of action puts pressure on the weed population; effectively control susceptible weeds and exert selection pressure on the group of plants, which causes the emergence of resistant weeds. The result is a lower efficacy of crop protection technologies, therefore, strategies or practices that delay the selection of resistant weeds should be implemented to preserve these technologies as a key resource in managing weeds.

The number of herbicide resistant weeds continues to increase worldwide, as well as the number of acres scattered with these species. Resistance changes the way a herbicide is used by growers, however so far, there have not been reports of the total loss of use of a specific group of herbicides. 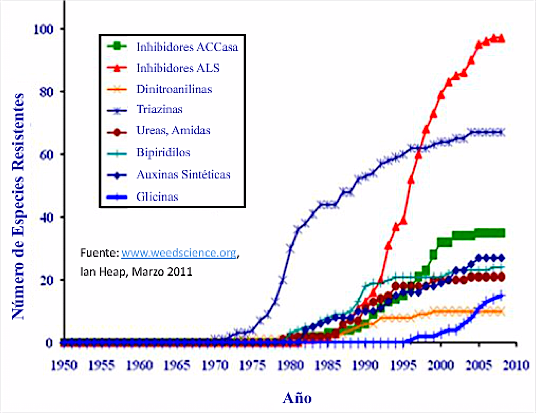 Chart with the current situation with resistant weeds. Source: weedscience.org

What is the impact of resistant weeds in Argentina and Brazil?

Argentina
The first case of resistance was found in Argentina in 1996 in biotypes* of pigweed (Amaranthus quitensis) resistant to herbicides inhibiting the enzyme acetolactate synthase (ALS), i.e. imazethapyr, chlorimuron ethyl and flumetsulam. In 2005 and 2006 glyphosate resistance was observed in biotypes of Johnsongrass, and studies conducted during 2007 in the southwest of the Buenos Aires province documented the existence of populations of ryegrass (Lolium spp.) resistant to this active ingredient.

It should be noted that in Argentina, the affected area by resistant weeds so far does not reach an important scale, its progress is of concern and the production costs increase in the affected lots it is significant; the projection of this problem is critical because growers and technicians do little to address it.

Awareness campaigns on the impact of combines on seed dissemination have not been conducted yet, and although growers recognize this situation they do not react proactively and take appropriate prevention measures. Clearly, the affected lot loses sustainability by the increase in production costs, however, with good control yields should not decrease. The weeds that have most impact in the production system are Sorghum halepensis and Amaranthus palmeri, the first at national level and the second mainly in the south-west of Córdoba.

Before the 80s, hairy fleabane was only problematic in pastures, as in areas with intensive and extensive conventional cultivation, tillage did not allow the weed to develop.

Currently with the widespread use of no-tillage, the advance of hairy fleabane is widespread and it affects the whole national agricultural area, with the highest incidence in the core Pampas region. In 2012 delayed applications due to heavy rains worsened the problem, plus soybeans were planted in fields where hairy fleabane stood alive, preventing its effective control.

According to INTA (National Agricultural Technology Institute), the toughest weeds for resistance are Johnsongrass, Lolium multiflorum and L. perenne, E. colona (jungle rice), hairy fleabane, shrubby false-buttonweed (Borreria verticillata), globe amaranth (Gomphrena pulchella and G. perennis), Chloris spp. and Trichloris spp. It is said that the outbreaks do not come from other places, but originate in the place itself. This was indicated in studies conducted by researchers at UBA (University of Buenos Aires) and INTA.

Brazil
According to Dionisio Luiz Pisa, Embrapa Soybean Agronomist, currently 90% of the area seeded with soybeans is resistant to glyphosate (Glycine Chemical Group). It is estimated that the greatest problems with resistant weeds are in the south of Brazil but it is difficult to state exactly those percentages, plus there is no data for the central region of Brazil, but it is known that the problem is starting in that region.

In the South region it can be assumed that the problem is serious in about 6 million hectares, since hairy fleabane has spread in the productive areas.

Description of the main resistant weeds

Researchers from the Agronomy School at UBA (FAUBA) and CONICET (National Scientific and Technical Research Council) argue that ecological conditions related to soil type and high temperature favor the development of resistance of Johnsongrass in northern Argentina, because it is a tropical weed.

What recommendations can be taken into account in the prevention and control of resistant weeds?

* Group of plants within a given species with biological characteristics that are not common to other individuals in the population.