Soybean Thrips Or Caliothrips Phaseo
The Small Devourer of Soybean

According to Argentinaâ€™s Instituto de TecnologÃ­a Agropecuaria (INTA), extreme periods of drought in certain areas of the country have allowed for the massive propagation of thrips in soybean crops throughout the region.

In the last decade, Soybean Thrips have become one of the most threatening pests for growers of this legume.

Thrips increase their population in very few days. Rapid treatment and the constant observation of crops in order to avoid propagation are indispensible.

The larvae complete their cycle into the adult phase while in the soil and pest resurgence is very fast as adults emerge in 5 to 7 days.

Thrips are very small insects that measure 1 to 1.5mm in length. When they are in the adult stage, they are a dark color and possess a chewing mouthpart with which they perforate and rip the vegetative tissue. This allows them to absorb the cellular juices that they use to feed themselves.

In the juvenile stages, the larvae or nymphs are smaller and of a yellow color. They mostly stay on the underside of the leaves.

When thrips are present, small whitish stains (empty cells) appear on the leaves of the plant, which later take on a yellowish, maroon and even a reddish color. This is why crops that are severely affected have leaves that are silver or grey, and later turn bronze. As a consequence of these lesions, there is an increase in the loss of water, and during a drought the crops die even more rapidly. Additionally, thrips are possible paths of entry to disease-causing agents.

What are the symptoms presented by an infested crop?

Soybean thrips can cause direct or indirect damage:

Direct damage, due to the tearing of tissues by the adult insect, increases the loss of water from plants, which under drought conditions dehydrate and die faster. Large quantities of thrips per leaf (40-50) prematurely age the leaves and can cause them to fall from the plant.

However, the real damage that impacts crop yield is caused by the nymphs. Over a period of three or more weeks feeding on the underside of the leaf, the nymphs destroy the waxy layer that the plant produces in order to protect itself from dehydration, which increases the transpiration rate and the loss of water from the vegetative tissue.

Thrips also cause a disorder in the stomatal opening, which causes even greater damage. The result is the premature aging of the leaves and their eventual fall.

Damage due to the wounds, â€œthe wounds left on the leaves can be a pathway for the entry of disease-causing agents (fungus, virus, bacteria)â€.*

What biological, physical and environmental factors facilitate the propagation of the pest?

Water stress caused by drought allows for the rapid increase in populations as it favors the development of thrips in the pseudo pupae state in the soil. After successfully completing this phase, the adult insects come out of the soil and disperse throughout the crop.

Wind is the main mode of dispersal of adults. On their own, they have a very low ability to fly, but winds can blow them for considerable distances within their lot of origin and into other fields.

Thrips are first detected in less fertile soils or soils where the plants suffer to a greater degree from water stress. The borders of lots, where soils are more compacted and degraded due to the passing of machinery, are the first to be affected by this pest. Infestations also occur in internal areas in patches of low fertility or poor water retention. 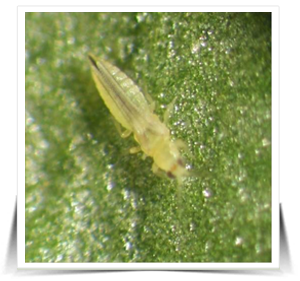 What preventative measures can be taken to avoid this pest?

Although rotations with grasses reduce local infestation, the adults blown by the wind will colonize the crop anyway, regardless its predecessor.

It is necessary to carry out a rapid and complete treatment of the crop, and then conduct constant observation to avoid new foci of propagation.

What control mechanisms should be taken to control the appearance of the pest and/or eradicate it from the crop? (Cultural, Mechanical, and Chemical Control)


Chemical control is the most efficient method. The innovations in products that act via penetration through the leafâ€™s sheet offer technologies that manage to â€œtranslaminarâ€ to the other side, where the nymphs that cause the greatest damage are located.

What innovations and technologies has the industry developed to protect crops from this pest?

The Crop Protection Industry is researching the effect of certain physiological insecticides that could reduce the future infestations of Soybean Thrips after its application, as these insects can produce various generations during the same year. Numerous observations of treatments that combine penetration insecticides (to control the current population to a high degree) with some physiological components have already been carried out.

Terrestrial applications at low volumes (20 to 25 liters per hectare) have demonstrated greater effectiveness than applications at conventional volumes (60 to 80 liters) and high volumes (100 liters or more). This can possibly be attributed to the greater concentration of each drop that falls in infested areas and the greater penetration of the drops due to their size.

Generally speaking, what has been the total loss due to Soybean Thrips in Latin America, or in Argentina, during 2011/2012?

There are no concrete estimations of the damage due to the pest, particularly in Argentina. Some measurements by researchers in Argentina, such as Gamundi and collaborators in INTA Oliveros, and from Peralta and IgarzÃ¡bal in Cordoba, show reductions in yield due exclusively to Soybean Thrips from 800 to 1,000 kg per hectare.

Considering that the affected area represents more than 15,000,000 hectares, the influence on the total harvest will be of real significance. And considering that the average yield in Argentina is 2,600 Kg/Ha, according to these calculations, thrips could reduce production by 31 to 38%. 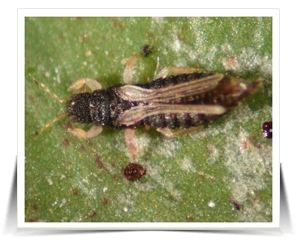