Bees help coffee in the face of climate change

Recently, a study was published that analyzes how coffee would be affected in the region with the highest grain production in the world: Latin America. The good news is that the diversity of species of bees will help compensate the lack of adaptability of the plant to climate change thanks to pollination.

In the latest issue of the prestigious scientific journal PNAS (Proceedings of the National Academy of Sciences of the United States of America) a multinational study led by the International Center for Tropical Agriculture was published, together with other well-known scientific research institutions in several countries, computationally modeled the current and future distribution of coffee and pollinators associated with this crop, under different scenarios of climate change that could occur in Latin America. Scientists recognize that climate change will continue to be one of the main factors affecting agriculture and pollinator species, which will have an impact on food security and rural development (Imbach, et al., 2017).

According to the Food and Agriculture Organization of the United Nations (FAO), climate change causes direct and indirect effects that affect agricultural productivity, such as changes in rainfall patterns, droughts, floods and the geographic redistribution of insects, including pests, and other organisms that cause diseases and losses in crops (FAO, 2017). Different studies have calculated that by 2050, the global area suitable for growing coffee can be reduced by at least 50% (Ovalle-Rivera, Läderach, Bunn, Obersteiner, & Schroth, 2015). These losses will affect approximately 100 million farmers and other people who depend on coffee (Bunn, Läderach, Ovalle-Rivera, & Kirschke, 2015).

As with many other agricultural commodities, one of the main challenges of coffee cultivation in the face of climate change is the low genetic diversity in commercial crops (McGuire, 2016). Historically, coffee crops have been seriously threatened by outbreaks of fungal infections, such as the one that causes rust, caused by Hemileia vastratix, or the iron stain, caused by the fungus named Cercospora coffeicola. As for the pests, three insects cause the main affectations: the broca, Hypothenemus hampei; the leaf miner, Leucoptera coffeellum, and the root moth, Dysmicoccus spp. (National Federation of Coffee Growers of Colombia, 2010). Currently, there are agricultural technologies to address some of these challenges, such as genetically modified varieties and crop protection agrochemicals such as fungicides and insecticides, but as climate change intensifies, pests and infectious organisms will become resistant to some of these technologies. For this reason, it is fundamental for the countries of Latin America to exercise appropriate regulatory options for tropical ecosystems that allow progress in the development of new technologies and new products into the future.

On the other hand, more than 100 insect species have been identified as living synergistically with coffee, including pollinators such as bees. The action of pollinators has a positive effect on the performance of the coffee crop, as well as on the quantity and size of its fruits (Roubik, 2002) (Olschewski, Tscharntke, Benítez, Schwarze, & Klein, 2006). Among the different pollinators, bees play a very important role in providing pollination services to the cultivation of coffee in Latin America.

The results of the modeling led by CIAT suggest that it is important to jointly study the direct and indirect effects of climate change on crops. In the case of the coffee that is grown in our region, it is expected that in certain areas the areas suitable for growing coffee will decrease, while at the same time they may increase in others. At the same time, when the areas decrease, the possible expected decrease could be cushioned by the presence of an adequate number of pollinators that increase productivity. In contrast, when the number of pollinators decreases, this could negatively affect crops even in areas where there is an increase in suitable areas to grow coffee. The following figure summarizes the main findings of the study. 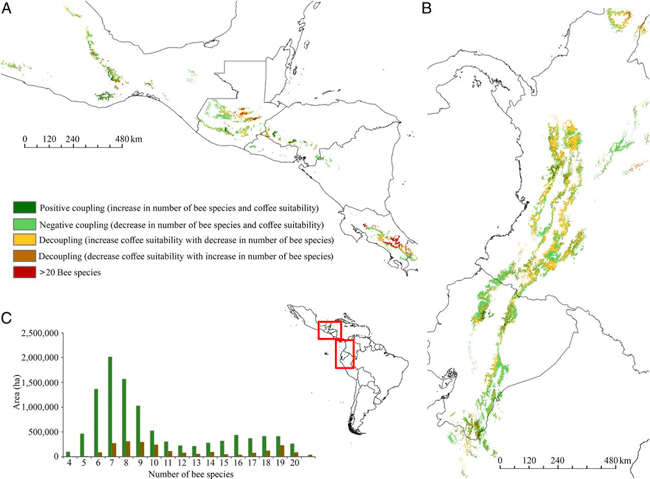 The dark green areas in A and B indicate those where a positive association between arable areas and a good number of pollinators is expected (10-22%), while in light green there are areas where there would be a negative association between arable area and the number of bees (34-51%). This means that in dark green areas one sees the areas where both agronomic conditions and pollination would increase, being the best possible scenario. In light orange and dark colors, there are areas where agronomic conditions improve, but the number of bees decreases (31-33%) and vice versa (8%). This means that in these areas, the decrease in arable area or number of bees will be partially offset by the increase in the other factor, decreasing the probability of productivity losses. In red, you can see the areas where a greater number of bees are projected (more than 20 different species), indicating a positive scenario for these pollinators, even in the face of climate change. Histogram C in the figure indicates the total number of bee species in areas suitable for cultivation, where the species of bees will increase (green) or decrease (brown), but in any case will benefit from pollination by these insects, when there are between 3 and 20 species present in the crop.

Although under the warming scenarios modeled in the study one may expect that the cultivable areas could decrease between 73 to 88%, and the number of bee species affected by that warming would decrease between 8 and 18%, all areas with arable crops will have an adequate number of bees that will help improve productivity through pollination, namely more than 5 species in all areas and more than 10 bee species in 46 to 59% of the arable areas. In this type of current and future scenarios, good communication between farmers and beekeepers will help strengthen the synergy between species and promote good practices, both agricultural and beekeeping, that contribute to sustainability, biodiversity conservation and food security.

This study highlights how one of the main challenges, both for agriculture and beekeeping, will continue to be the climate change and how breakthroughs and innovation in crop protection technologies, also aiming to control diseases and infestations of pests in bees, will play a key role in continuing to promote a positive coexistence between these two practices and the conservation of biodiversity.