Biotechnology in Soybeans is Essential for the Production of Meat, Eggs and Milk 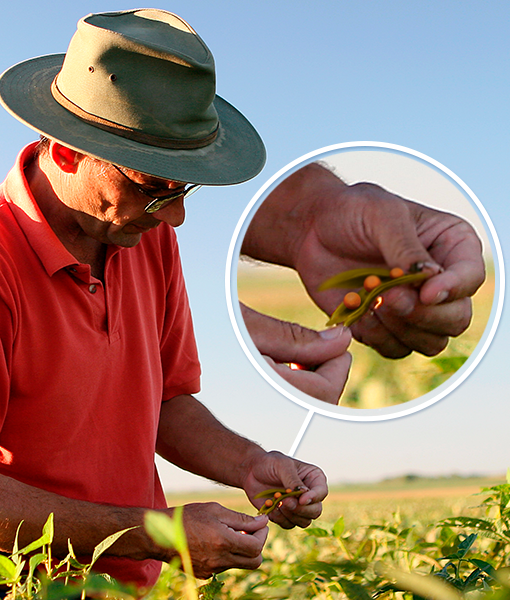 Soybeans are one of the world's most important crops and a basic component of feed concentrates. These in turn are the source of meat, chicken, eggs, milk and many everyday products that accompany us on our dinner table. Biotechnology plays a very important role given that 81% of the world's soybeans are biotech and that allows the farmer to produce soybeans more profitably, generate special oils for frying and apply modern farming practices for soil conservation.

85% of the soybeans are processed as soybean meal and oil. Soybean meal is commonly used in animal feed concentrates because it contains a large amount of protein. As a side note to the reader, generally it requires 3 kg of grain to produce one kilogram of pork meat . The oil is used directly for consumption and in some cases to generate biodiesel.

Now, we should understand a little the global soybean market, the role of biotechnology and which biotechnologies exist or are in development for soybeans.

Let us Start with the Global Market

The commercial trade depends on whether soybeans are exported as a grain with 129.1 MMT or as meal with 66.2 MMT; the breakdown by country and the political situations that give rise to this difference is described below.

86% of the world soybean exports as grain come from three countries, the United States (46.7 MMT), Brazil (57 MMT) and Argentina (10.8 MMT); the rest comes from other South American countries such as Uruguay, Paraguay and Bolivia (7.8 MMT), the Ukraine (2.4 MMT) and others (4.9 MMT). The importers of these soybeans are China (83 MMT), the European Community (13.7 MMT) and Asian countries such as Taiwan (2.4 MMT) and Japan (2.9 MMT). Regarding the soybean meal, the largest producers are Argentina with 30.6 MMT, Brazil with 15.6 MMT and the United States with 10.8 MMT. The soybean meal importers are mainly European with 20.2 MMT and Southeast Asia with 16.3 MMT .

Let us analyze the political arena to understand the differences of global soybeans exports. In the 90's the Chinese government began its transformation from soybean producer to importer. China applied for World Trade Organization membership in 1995 and became its member 143 in December 2001 , . Three additional policies point to that change from producer to importer. The first is that the country generated a policy in 1995 to be 95% self-sufficient in grains such as wheat and rice, excluding soybeans . The second is that from 2008 to 2012 it generated a greater support policy in order to control prices in crops such as rice, wheat and corn and not as much for soybeans. The third is the Chinese border policy that favors imports of soybeans with a 3% tax, compared to those of meal and soybean oil with 5 and 9% tax, respectively.

In addition, China's population of 1.4 billion (18% of the world population of 7.5 billion) is consuming more meat per capita; in 2015 it consumed 50 kg per capita and that is expected to increase to 56.5 kg per capita in 2025. As a point of reference, the country with the lowest consumption is India which will increase its consumption from 2.9 to 3.4 kg per capita in the same period of time. In addition, China has limitations in water and arable land and the soybean production cost increased as a result of the cost of land rental and labor . All this makes China a net importer and dependent on soybean imports in order to supply a large animal feed industry for the production of pork, chicken and beef . In terms of forecasts this means that China, with a current consumption of 83 million tons of soybeans, would increase its consumption to a total of approximately 109.5 million in 2025 .

The role of Biotechnology

Biotechnology has been widely adopted by the corn, soybean, canola and cotton producing countries. In the case of soybeans, in the United States, according to the Department of Agriculture (USDA) the adoption rate is 94% , the percentage is similar in Brazil with 93.2% of the 31.2 million hectares planted and in Argentina it is practically 100% , while globally it is at 81% .

The adoption is given by an increase in yield resulting from the crop protection, mainly from weeds, in the herbicide tolerant crops and it is assessed as a benefit of at least 4.2% more income to the farmer, and a cumulative total of 46.6 billion dollars from 1996 to 2014. On the other hand, for insect resistant and herbicide tolerant soybeans, the percent yield gain for the farmer ranges between 7.8 and 11.9%. Furthermore, the use of such varieties allows the use of minimum tillage, which increases carbon sequestration, reduces fuel consumption from 45.6 to 31.7 liters per ha by plowing equipment and increases soil protection .

The safety of biotechnology for human health and the environment has been extensively reviewed by academics, scientists and regulators from around the world, such as the National Academy of Sciences of the United States , the GRACE project of the European Community , and the UK Council for Science and Technology .

The trait that is most generally adopted is herbicide tolerance because it was the first improvement that was introduced in the 90's. Nowadays there are various soybean improvements in the market, which include a greater number of beans per pod (pods with 3, 4 and 5 grains), soybeans with saturated fatty acids (i.e. with oleic acid without linoleic acid) that allow to generate specialized frying oils without trans fats, soybeans tolerant to lepidopteran insects and new herbicide tolerances . If the reader were interested to know the improvements or traits authorized for the crop, he/she could follow the references for Brazil , Argentina , and the United States .

Importing countries have also approved the new varieties of soybeans for entry into their markets as in the case of Europe with three new authorizations issued in July 2016 corresponding to soybeans with herbicide tolerant, with an increase in oleic acid and with lower linoleic acid ; and China with tolerance to more herbicides .

One of the most interesting and public traits entering the soybean stage is drought tolerance from Argentina. Researchers at the Institute of Agricultural Biotechnology of the Universidad Nacional del Litoral (UNL) from Argentina found a sunflower gene called Hahb-4 which is like an activator of the internal warning system of the plant against drought , , . This means that soybeans with this trait would respond faster to drought and could survive longer.

The new generation of soybeans that we will see in the next few years includes nematode tolerance, disease resistance, fungal resistance, higher yields, and an increase in nutritional value oils. In a medium term of 5 years there will be soybeans in the market with a greater content of omega-3, soybeans with low saturated fatty acids, new generations of insect tolerance and soybeans with multiple herbicide tolerances .

In summary, soybeans are and will continue to be a crop of great global importance. Biotechnology plays a key role to make the crop efficient and profitable and remain as a low cost basic commodity so that we can have meat, chicken, eggs, milk and many products that are with us every day.