Importance of Herbicides for No-Till Agriculture in South America

The area under no-tillage has been growing steadily all over the world, but highest rates of adoption have been achieved in South America. South America represents 47% of the total global area under no-till.12 While in 1987, there were only 670,000 hectares of no-till in the MERCOSUR countries (Brazil, Argentina, Paraguay, and Uruguay), by the year 2002 the technology had grown to over 30 million hectares.  No-till adoption in terms of percent of total cropland is as follows: Argentina (80%), Brazil (50%), Paraguay (90%), and Uruguay (82%).,13,18,11,21,9 In southern Brazil, adoption of no-till exceeds 80%.13 Brazil cultivates about 33.5 million hectares through no-tillage. Brazil is the only country in the world where zero tillage has been successfully adopted by a large proportion of smallholder farmers; 90% of the land cropped by smallholders is under no-till. In Argentina and Brazil, 70% of no tillage is permanent; this means that once started most farmers never till again.

No-tillage is defined as the planting of crops in previously unprepared soil by opening a narrow slot, trench or band only of sufficient width and depth for proper seed coverage. No other soil preparation is performed.5 Weed control is one of the major reasons for tilling the soil.3 Before planting, it is necessary to kill the weeds in the field. No-till is dependent on herbicides because of the elimination of tillage for control of weeds.6, 14

The most important factor in no-till adoption in South America was to educate and convince farmers that there was a new way to farm land without tillage.11  The availability of herbicides to control weeds without tillage was a key factor in convincing farmers to adopt no-till.22

Tillage pulverizes the soil exposing it to the rain and wind that act as strong eroding forces.10 Tillage decreases water infiltration capacity, increases water runoff, and decreases soil organic matter by enhanced oxidation. In Brazil in the first years of cultivation, tillage contributed to the loss of up to 30-50% of the initial soil organic matter.21 As a result, tillage degrades agro-ecosystem and soil quality and fertility. In southern Brazil rainfall is concentrated in a few heavy storms which cause disintegration and transport of soil aggregates.7 The Argentinian semi-arid region is characterized by dry and windy winters, which cause considerable wind erosion. This increased sediment-laden run-off makes flooding, siltation of roads and reservoirs, and the destruction of bridges widespread during and after intense rainfall events, resulting in significant maintenance costs.

During the 1970s agricultural policy in Brazil, Argentina and Paraguay encouraged the expansion of the agricultural frontier and the production of soybeans and wheat, which replaced activities such as coffee and livestock.6 These new economic activities were implemented under conventional cultivation which, combined with intense rainfall, led to serious soil losses over vast areas.6  During the 1980s, two-thirds of the cropland in southern Brazil showed some form of soil degradation.13 Erosion rates were high throughout South America under conventional tillage (up to 23 t/ha).1 Siltation of roads and reservoirs was common. The annual silt load of the River Plate, which drains the wheat-soybean area in Paraguay, was estimated at 95 million tons- and consisted primarily of topsoil, rich in nutrients and organic matter.2 The soil degradation threatened the sustainability of commercial agriculture.8 Farmers realized that radical changes in their farming systems were required to reverse the degradation trend and restore and secure their livelihoods.4 At the same time, the possibility to increase total production and supply both the domestic and the international market was perceived by farmers as an important opportunity.19

The reasons why adoption of no-till has been so extensive and quick in South America are manifold. As agriculture in South America is relatively young with many areas having been incorporated to agricultural production only in the last 30 or 40 years, in general there is no deep-rooted tradition to agriculture in these countries. Young farmer generations have incorporated new land into production in many regions and are open minded to new technologies. Erosion and soil degradation were obvious to the farmers, who looked for technology to overcome these problems.2 Apart from enabling their land to be cropped more intensively without risk of degradation, no-till attracted farmers because it increased crop yields, and cut tractor use, resulting in big savings in fuel and production costs.12

However, the biggest obstacle for the expansion of no-till, weed control, still required appropriate technical solutions.15  The feasibility of the system came about with the marketing of first, paraquat and then glyphosate for total weed control.2 The production and availability of a greater variety of more effective herbicides together with a greater diversity of more efficient no-tillage seeding equipment led to the unprecedented growth of no-tillage in South America.5,23 In the 1980s, many Brazilian companies started to produce glyphosate resulting in greatly reduced prices which facilitated  adoption of no-till. 15 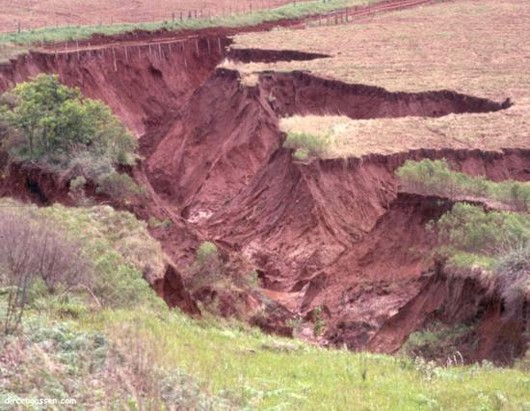 The use of no-till called for new management skills particularly to control weeds.8 A farmer has to have a good knowledge on herbicides, weeds, and application technology.5 The key skills required are: selecting the type and quantity of herbicide used, regulation of sprayer pressure, output, speed and timing of herbicide application and using spot spraying with weed-specific herbicides.8 Two publications written in the early 1980s (now in their 4th edition) helped to provide the information and became a milestone in allowing more farmers to adopt the system.5 In 1996, a more advanced publication on application technology was made available to farmers in Brazil.5

In the tropical regions of Brazil, early studies showed that no-till could reduce soil erosion by up to 97% and water runoff by 70%.14, 23, 17 After the extensive adoption of no-till farming, soil erosion losses were reduced significantly. In Argentina, erosion was reduced by 80%.11 Soil erosion in Brazil decreased from 3.4-8.0 t/ha under conventional tillage to.4 t/ha under no-till. As a result of no-till adoption, rural infrastructure has been better protected. For example, the total amount of savings in rural road maintenance in Santa Catarina state of Brazil from 1992 to 1999 was estimated at about $900,000.4 A watershed study in Brazil showed a 22% reduction in sediment load from 1994 to 1998 because of no-till adoption.1 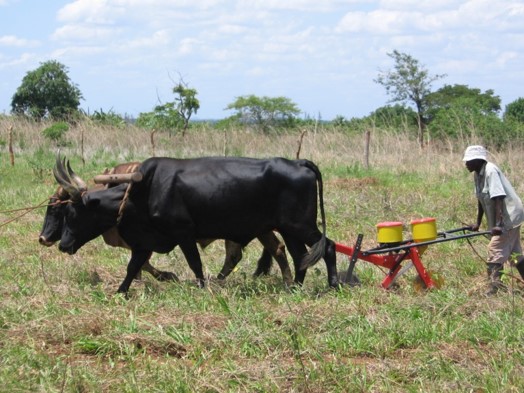 In Argentina, costs were reduced by more than 50% as the number of passes with tillage machinery, including plough or chisel, has decreased from 3-5 to just one, the seed drill.11 The cost of the tractor use is much less at about US $6/hectare for spraying compared to US $42/hectare for ploughing in Argentina.11 No-till agriculture promotes a reduction of 46% in the total hours of equipment and machinery use due to no plowing. A 19-42% reduction in the consumption of fuel was also observed.6,4

The impact of no-tillage on saving time and labor has been the main factor for adoption by small-scale farmers.14 Since no-till does not require plowing for weed control, drudgery is reduced.6 Labor reductions in Brazil as a result of no-till were 10% for soya and 51-55% for maize.4 The main factor contributing to the labor reduction was the substitution of herbicides for mechanical weeding/hand hoeing.14 No-tillage has opened some opportunities for small-scale farmers. An assessment in Brazil showed that 54% of the farmers increased their cropping areas while 33% employed the surplus labor in other income activities.14,6,4

In Paraguay, no-till led to a reduction of 12% in labor requirements and an increase of 77% in net farm income.4 In two regions in Paraguay, a study compared the financial profitability of no-till with conventional till over a ten year period. By the tenth year, net farm income had risen on the no-till farms from under US$10,000 to over US$30,000 while on conventional farms, net income fell and even turned negative.12 Crop yields on the conventional farms declined by 5-15% while on the no-till farms, they increased by 5-20%.8 Based on a sample of farms in Parana, Brazil it was determined that net farm income increased by 59% five years after the beginning of the no-till project.4 Large mechanized farms in the Cerrado region of Brazil demonstrated that net farm income can even double in a few years with no-till adoption.4

Yield increases in Brazil as the result of no-till were recorded as 20-30% for maize and 27% for soya.4 The productivity of soybeans on large-scale farms has tended to increase with time under no-till in comparison to conventional tillage.21 In Brazil before the introduction of no-till systems, maize productivity was less than 6 tons/hectare but now the best no-till systems produce an average of 10 tons per hectare.14 Improved water management that no-till allows is a major reason for the higher yields.18 No-till has reduced surface water runoff and increased infiltration because pores and channels in the soil are not disrupted by tillage.7,12 In Brazil, a six-fold increase in water infiltration was measured.12 Thus, no-till has provided a means to maximize effective rainfall and recharge groundwater as well as reduce risks of flooding.12

In Argentina an additional four inches of soil water was accumulated in the no-till system, which facilitated the expansion of soybean and maize acreage into areas where water availability had limited plantings.17,19 Soybean yield increased while the cost of production decreased .20 The cumulative benefits to Argentinean farmers of the adoption of no-till from 1991-2008 is estimated at $12.0 billion in increased gross income and $4.7 billion in decreased production costs. 16

Control of soil erosion is one of the main driving forces for no-till adoption. No technique yet devised by mankind has been anywhere near as effective at halting soil erosion and making food production sustainable as no-tillage.5 The no-till systems in South America have been shown to have many advantages but only with chemical control of weeds with herbicides.3,14.

10. Alvarez, R. and H. S. Steinbach. 2009. A review of the effects of tillage systems on some soil physical properties, water content, nitrate availability and crops yield in the Argentine Pampas. Soil & Tillage Research. 104:1-15.

19. Peiretti, R. 2004. The no-till cropping system and its evolution toward the achievement of the MOSHPPA model principles. Proceedings of the World Soybean Congress, Foz de Iguazu, Brazil, March 1-5. Pgs. 282-290.