Importance of Pesticides for Growing Maize in Latin America 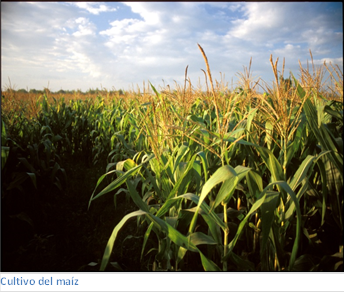 Maize represents about half of the total food and calories consumed in Mexico. With regard to increasing maize production in Mexico to meet the country’s needs, little new land remains on which maize production can be profitable.2 Therefore the most viable means of meeting national demand in future years is to increase maize yields. Most of the maize produced in Mexico is grown on small farms. Yield gaps are large among Mexico’s small to medium scale maize farmers, with productivity estimated at just 57% of potential.3 Mexico has the potential to gain self-sufficiency in maize relatively quickly through the adoption of existing technologies including the application of pesticides to the maize crop. Maize production remains of vital importance to smallholders in Mexico concerned with meeting their subsistence needs and it is one of the few productive uses of land and labor currently available to them. Growing maize is a survival strategy few farmers can do without.27

Many maize farmers in Brazil do not carry out all the appropriate management practices needed for the maize crop. The main management practices affecting maize production in Brazil are water deficit and control of weeds, insect pests and diseases.14 The average maize yield of family farms in central Brazil is about 54% lower than the potential yield.19

Weeds reduce maize yields by competing for water, nutrients, space and light. Studies in Brazil have shown that the removal of nutrients by weeds has a negative impact on the maize crop, affecting its accumulation of dry matter.5 The weeds reduced the root system in all maize cultivars.5 A smaller maize root system due to weed presence is less efficient in nutrient absorption. The maize crop develops stress symptoms due to lack of water earlier when it is infested with weeds rather than when it is weed-free.5 Research in Brazil and Mexico has shown that, if weeds are not controlled, maize yields are reduced by 35 to 88%.13,11,16

In the 1950s-1960s the use of herbicides for controlling weeds in maize in Latin America was not seen as economical due to a large number of agricultural workers who were available at low cost to do hand weeding.6 Thus, in 1973 in Brazil the area of maize treated with herbicides was zero.6 Today in Brazil about 65% of the maize hectares are treated with herbicides.7 The adoption of herbicides in Brazil was the result of the extensive migration of workers from rural to urban areas caused by the government-led industrialization process that took place in Brazil from the 1960s to the 1980s. The rural population of Brazil decreased from 64% of the total number of inhabitants in 1950 to 32% in 1980 and 16% in 2010.8

Herbicide adoption is low in the northeastern region of Brazil where farmers still rely on hand weeding.9,11 Inadequate hand weeding in northeastern Brazil has been identified as one of the main causes of low maize yields.10 Weeding needs to be done in maize during periods of peak demand for labor on the farm. Most farmers do not put a priority on weeding and weeding is only performed when time and labor are available.12 Diagnosis of the maize productivity yield gap in central Brazil identified weeds as a main factor explaining the gap between observed yield and simulated potential yield.20 The weed constraint was mainly due to poor timing of weeding and weeding failure due to climatic constraints.20 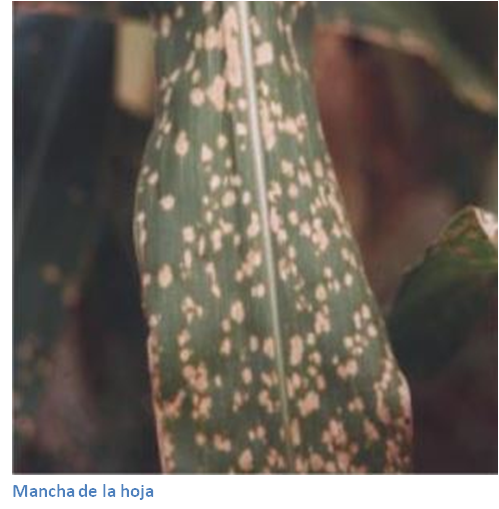 Hand weeding is often done late after the weeds have competed with the maize crop for an extended period of time. When the machete is used for weeding, the weeds have to reach a certain height to be grabbed and cut; this usually happens twenty days after emergence. A great deal of the maize yield potential has by then been lost to the weeds. Rains very often delay the weeding, making the situation worse. This cutting takes one person a week to clean one hectare.16 In Mexico, the reduction in maize yield when conventional weeding is practiced has been estimated at 34%.16

In Mexico, herbicides have increasingly substituted for traditional forms of hand weeding e.g. with machete, hoe, and/or animal drawn implements. 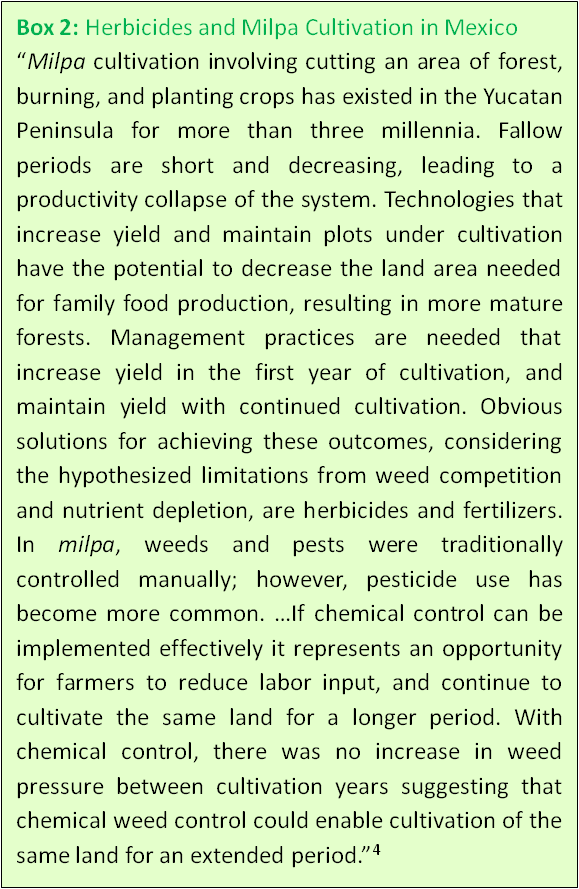 Only about 25% of small-scale farmers rely exclusively on manual slashing of weeds.15 The main reason why Mexican farmers have turned increasingly to herbicides is that manual weeding with a machete or hoe is the most time-consuming of farming operations.27 The available herbicides have provided effective control of annual weeds. However, poor control of perennial weeds has become more important over time.2 Effective control of perennial weeds with the herbicide glyphosate has the potential to raise maize yields by .9t/hectare.2

The use of foliar fungicides on maize has increased greatly over the past ten years in Brazil in an attempt to control foliar diseases and increase yields.21 Leaf spots were considered of secondary importance in the 1990s. However, increases in incidence and severity of leaf diseases have been favored by late sowing, absence of crop rotation, narrow rows and zero-tillage practices, mainly with the use of irrigation.22 The use of fungicides in Brazil is essential to improve grain production.18

Gray leaf spot is an important disease of maize in Brazil. The disease has broad distribution in all maize-producing regions of the country.25 A recent experiment tested eight fungicide treatments in a maize crop infected with gray leaf spot.23 By controlling gray leaf spot, all of the fungicides increased the production of grain with 39% being the largest increment.23

On average, fungicide application has been determined to prevent maize yield loss of 12.3% in Brazil.26 Research in Brazil has determined that aerial applications of fungicides to maize were more efficient than those via ground sprayers.24 The use of fungicides to control foliar diseases of maize produced net economic benefits between $US 95 and $US 495 per hectare.24

Traditionally, the fall armyworm has been the 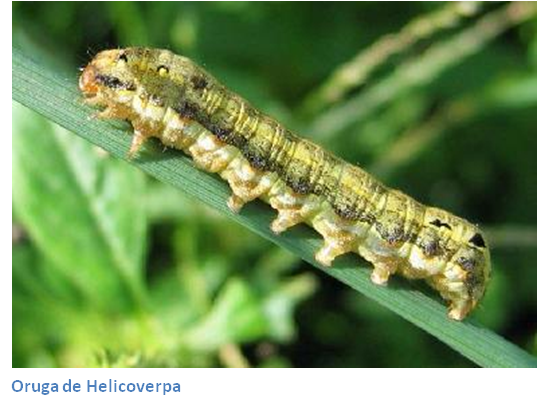 main insect pest of maize in Brazil. However, the widespread planting of Bt maize has provided effective control of armyworms reducing the need for insecticide sprays for that pest. In 2013, a variant of the corn earworm (Helicoverpa armigera) was detected for the first time in Brazil and spread rapidly. On an individual basis, some maize yields were reduced by as much as 50% by this new pest. Since the Bt maize varieties do not control corn earworms, the use of insecticides on maize in Brazil increased in 2013.

In Mexico, the soil pest complex is a major problem in maize.28 Research has shown that there is a correlation between the presence of larvae around the roots and maize yield: by reducing crop density, a single larva reduced the yield of maize by 7.54%.28 In Mexico, seed treatment with insecticides has been determined to be an economically feasible technological solution to problems in rainfed maize production with estimated increased maize production at .3-.7 t/hectare.2

One of the explanations of low maize yields in many Latin American countries is lower application of available pesticide technologies, which is a significant limiting factor for achieving the crops genetic potential.