Importance of Pesticides for Growing Rice in Latin America

Latin America and the Caribbean represent only 4% of world rice production. Despite its small share on a global scale, however, rice is the most important crop in the region as it is the staple food of a majority of the population.6 Brazil is Latin America’s biggest rice producer. Brazil is the 9th largest producer of rice worldwide and is the biggest producer outside Asia. Rice in Brazil is grown under two ecosystems: irrigated   (75% of production) and upland (25% of production), Each system occupies around 50% of the total rice area in Brazil.

In 2002, a project to bridge the yield gap in irrigated rice in Brazil and Venezuela was initiated by the Latin American Fund on Irrigated Rice (FLAR).24 The project demonstrated that the integration of six improved agronomic practices could significantly increase rice yields. Two of the practices were the use of seed treatments with insecticides and fungicides to reduce insect and fungal infestations and improved weed control with early application of herbicides.20 The improved technical package was rapidly adopted at the farm level. The project resulted in significantly higher rice yields of roughly 2 t/ha on average.18 The success of the program has led to its expansion to ten countries.6

Research in Brazil has clearly demonstrated the value of herbicides and seed treatments with fungicides and insecticides to increased rice yields.

The rice growing system in Rio Grande do Sul and Santa Catarina is by irrigation and the most important pest is the rice water weevil. In Brazil, insect pests have  become important factors that prevent even higher yields as they attack rice from germination to harvest.10 Insect pests have been estimated to lower rice production in Brazil by 10%.8

The rice water weevil Oryzophagus oryzae was first found in the south of Brazil in 1935 and probably originated from the more southern regions of South America.9 The Brazilian rice water weevil (Oryzophagus oryzae ) is not the same rice water weevil species found in the U. S. (Lissorhoptus oryzophilus). Adults hibernate in the cold months in dry environments close to the rice fields on the base of other grass species.13 Adults invade the crop during flood irrigation, feed on leaves, mate, and lay eggs in the submerged parts of the rice plant, and the main damage is caused by the larvae found in the plants around the tenth day after the beginning of irrigation.12 The weevils are excellent swimmers. Infestations initially concentrate on places with deeper water and can be spread to the whole area, even in parts without depressions in the land.12 The larvae of the species feed on the submerged roots of rice plants, impairing the ability of rice plants to absorb nutrients, which stunts development.9 If not controlled, the rice water weevil larvae can reduce rice yield up to 30%.14 The rice water weevil is estimated to cause the loss of about US $80 million per year in Brazilian rice production.9

There are three causes for the expansion of the rice water weevil in Rio Grande do Sul State.12 The first is the replacement of old cultivars by modern ones, developed without considering resistance to the insect. The second cause is the increase of area with higher land crops, mainly in the West frontier. This cultivation type, in inclined land, requires a larger number (and proximity) of walls and, therefore, there is a great number of plants growing on wall foots, where irrigation water is deeper and favorable to the development of the rice water weevil.12 The third cause for the expansion of the pest is the prohibition of the use of organochlorine insecticides which had been used to control the pest in the past.12

The application of synthetic insecticides is the major method used to control insect pests of rice in Brazil.10,13 Seed treatment with insecticides is the predominant control method for the rice water weevil in Brazil.11 Research has shown that insecticides applied to the seeds of rice reduced the larval population of Oryzophagus oryzae significantly up to 40 days after flood irrigation, with control efficiency superior to 90% and yield increases up to 25%.12,14

Rice blast is the most important yield limiting factor of upland rice in Brazil.26 Blast is also a major constraint in the irrigated area in Rio Grande do Sul and is being increasingly recognized as a major problem. Leaf blast at the vegetative phase and panicle blast during grain formation cause significant yield losses in Brazil.2 The useful life of resistant cultivars is usually only a few years because of the breakdown of resistance in the face of high pathogenic variability.21 The severity of the disease requires the use of fungicides.7,21 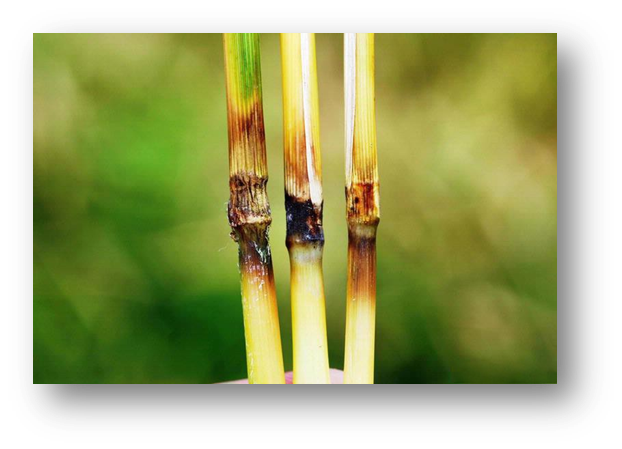 The blast fungus overwinters in rice straw and stubble and spreads rapidly by airborne spores. The pathogen produces necrotic lesions on leaves of seedlings and on leaves, nodes, necks, and panicles of mature plants, with the latter causing the most damage. Foliar lesions reduce the leaf area available for photosynthesis which results in significant reduction in grain yield.5 When it hits the head or neck, blast stops nutrients and water from getting to the kernels. Portions of the grain head will be white in contrast to the green or tan color of healthy grain. This “blasted” appearance is caused by blank grain. Severe infestations lead to large areas of dead plants. Yield losses due to panicle blast (including neck blast) are almost double those caused by foliar leaf blast.3 In an experiment in Brazil without irrigation, the average yield loss was 60%, considering the mean leaf and panicle blast severities of 34% and 50% respectively.27 Yield losses up to 100% have been recorded in a recent outbreak of blast in Brazil in a newly released upland rice cultivar.1

Most rice is subjected to water deficits that result in short- to long-term drought periods. Rice crops under moisture stress are predisposed to blast.4 The blast pathogen can survive much longer under dry conditions than under submerged or moist conditions. It may survive more than two years in dry infected straw.3 Rice plants grown under upland conditions are more prone to blast infection than those grown under irrigated conditions.3 In central Brazil, wide differences in day and night temperatures result in long dew deposition periods in upland rice. These long dew periods are an explanation for greater disease intensities in upland rice.4

There has been considerable emphasis in Brazil on the integrated control of rice blast including fungicides as one of the inputs to keep the disease at tolerable levels.5 Many effective fungicides have been introduced and marketed in Brazil. Neck or panicle blast occurs 7 to 10 days after heading and continues to increase until maturity affecting grain filling and grain weight. For panicle blast, reduction of collar infection and fungicide protection of early emerging panicles are critical.3 The critical period for panicle blast control is the mid-booting stage, rather than after heading. Infection of flag leaves is believed to lead to subsequent neck and panicle infection as panicle emerges. Thus, application of systemic fungicides during booting stages is a logical approach.3 One additional application 10 days after heading can further protect late emerging panicles.3 Two fungicide applications reduced panicle blast severity and increased rice yield by 42 %-60%.23,25 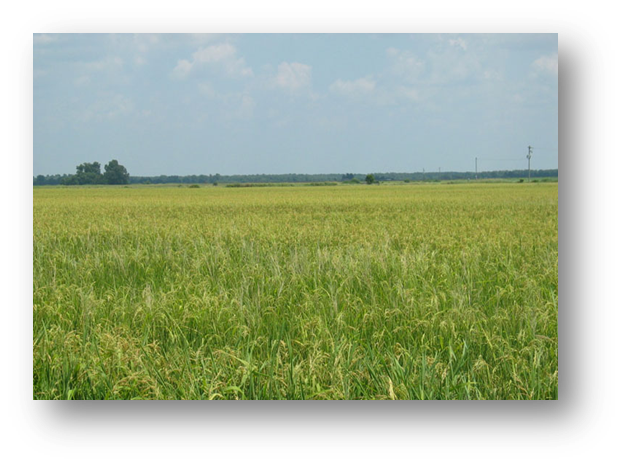 Weeds are the most widespread and costly constraint for rice production in Brazil. Weeds emerge every year in every field and lower rice yields by competing for space, moisture, light, and nutrients. The fields of irrigated rice in Brazil are extremely conducive to rapid weed growth, 17 Weeds are one of the primary constraints in upland rice production in Brazil. 19   In newly opened fields, weed populations are low and weed control is not a problem. However, during the second year onward, weed populations increase causing yield losses of 50% or more.19

Traditionally, small rice farmers used laborers to pull weeds by hand. However, labor availability has decreased as the rural population has moved to urban areas. High labor costs have resulted in high herbicide use by Brazilian rice farmers.19 In Rio Grande do Sul, herbicides are used on approximately 95% of the rice hectares.15 Experiments have shown rice yield reductions of 50% when herbicides are not used.15

Weedy red rice is one of the main problems faced on irrigated rice fields of southern Brazil. An estimated 95% of the irrigated hectares are infested with red rice. The term “red” refers to the pericarp color of dehulled grain.Intense milling to remove the red layer results in a high proportion of broken grains which lowers the value of rice by 35%.Besides its effects on grain quality, red rice is a very competitive weed since it is usually taller and more tillered than rice. In Rio Grande do Sul, red rice probably was the cause of a 25% decrease in rice yield.22Selective control of red rice using herbicides was not possible in the past because red rice belongs to the same species as cultivated rice. The introduction of herbicide-resistant rice cultivars allowed selective control of red rice with herbicides. The introduction of herbicides to control red rice occurred in Brazil in 2003 and since 2007, use of the herbicides resulted in an increase of approximately 40% in the mean rice grain yield in southern Brazil.16