Importance of Pesticides for Growing Wheat in Latin America

Argentina is the main wheat-producing country in Latin America and ranks 17th in the world with 15 million tons of production annually. Brazil, Chile, Uruguay, Paraguay and Mexico are also major producers with individual countries producing 1-6 million tons of wheat. Among the biotic constraints on wheat production in Latin America, fungus diseases stand out by their incidence in humid years. 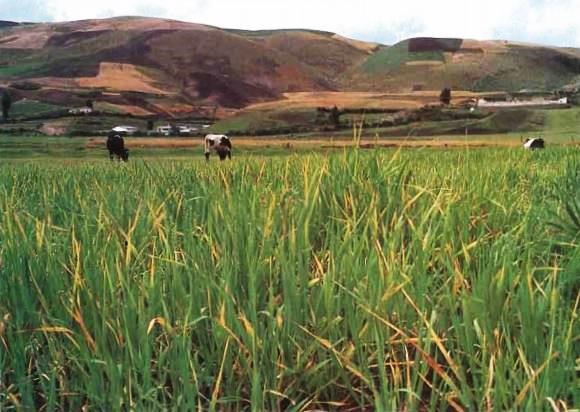 Aphids are the major insect pest of wheat in Latin America. Aphids are the principal vectors of barley yellow dwarf virus to wheat plants. The virus interferes with translocation by partially plugging the phloem. It can cause severe stunting of plants, inhibition of root formation, delaying or prevention of heading and reduction in yield. Management of the disease is mainly achieved through control of the vectors, the cereal aphids, by insecticide application.1 Chemical control is recommended if both vector and virus are annually endemic with a high degree of certainty.2 In the wheat growing areas of the Andean countries (Bolivia, Columbia, Ecuador and Peru) barley yellow dwarf virus is widely distributed and severe attacks occur every season.3 In Ecuador, experiments were established for controlling aphids with insecticides. Without insecticide protection there was a 17% reduction in wheat yield.4 Aphids are the most serious pests of wheat in Northwestern Mexico, nearly always requiring insecticide control in most of the wheat fields.5 Yield losses of up to 30% have been reported when insecticides have not been used.5

After the appearance of cereal aphids in Chile, Argentina and Brazil in the late 1960s, farmers sprayed insecticides several times per season. Control of the cereal aphids was obtained in Chile, Brazil and Argentina after the introduction and establishment of natural enemies.6 Insecticide use was reduced significantly although insecticides have continued to be used on 95% of the wheat crops in northern areas of Brazil.6 In recent years new aphid species have been introduced into Argentina that are not controlled by natural enemies. Wheat plants on the prairies of Buenos Aires province were devastated by an outbreak of the barley aphid in 2005.7 As a result, insecticide use for aphid control in wheat in Argentina has increased.7

Weeds lower wheat yields directly by competing with the crop for moisture, light and nutrients. Wild oat is the most troublesome weed in wheat fields in Argentina.8 Wild oat is very competitive with wheat. Wheat yield losses of 22% due to wild oat competition have been determined in experiments in Argentina.8 Wild oat seed may be dormant for up to six years if left near the soil surface. If worked deeply into the soil, seed may remain dormant for many years. Deep plowing does not rid an area of wild oats; it only prolongs the problem. 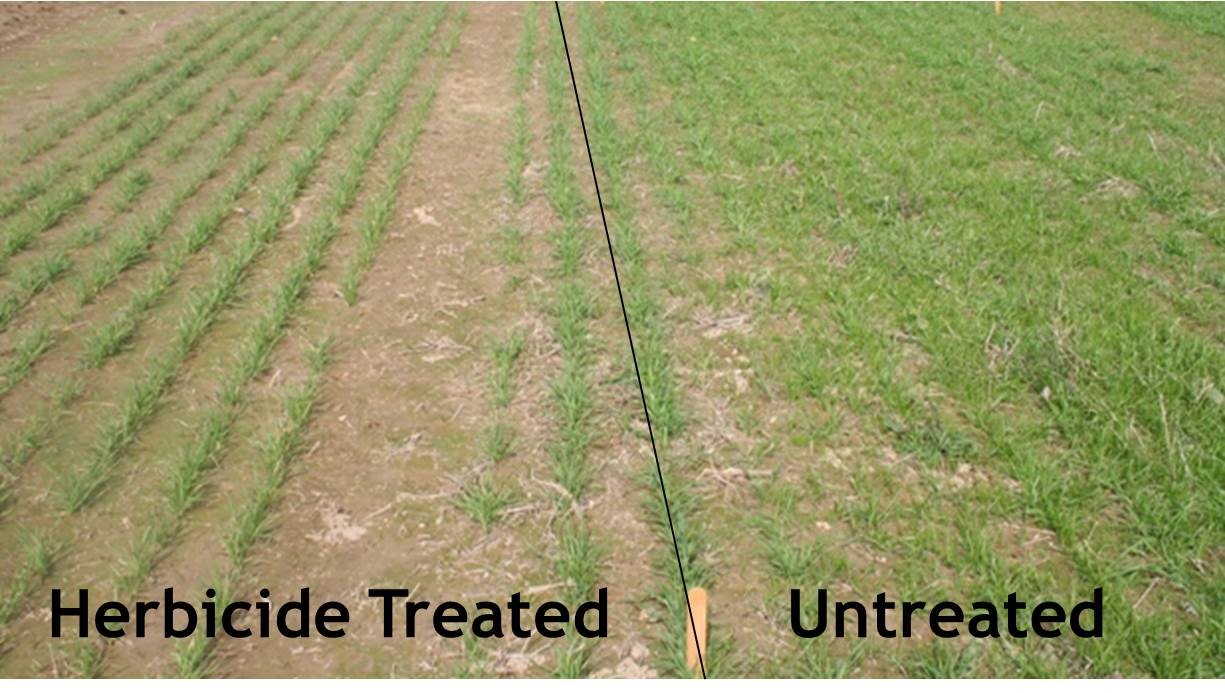 In the mid-1970s, wild oats were estimated to cause wheat yield losses of 15% in Argentina and Peru, 20% in Columbia and Ecuador and 30% in Chile.9 In the 1970s, the development of new herbicides made possible the selective control of a broad spectrum of annual and perennial grasses in wheat. Wild oat control, as for many grass and broadleaf weed species in Argentina, is strongly dependent on herbicides.8 This fact highlights the importance of increasing herbicide effectiveness, which includes not only product choice but also the selection of precise dose and timing of application.8 Control of grass weeds in wheat demands accurate crop management strategies for improving herbicide performance.8 Recent research with new herbicides showed reductions in wild oat populations in wheat of 94-100% depending on rate and timing.8 In weedy plots, 443 wild oat tillers m2 were counted while on the average of doses and time of application, 9 wild oat tillers m2 were counted. In this experiment, there was a significant advantage in terms of wheat yield to herbicide applied early in the crop cycle. This suggests that initial competition is critical in terms of yield reduction.8

Italian ryegrass is an important and troublesome weed in wheat crops in Argentina.10 It is present in 46% of the wheat fields of the most important cropped area and its control is mainly performed by selective grass herbicides.10 An experiment was carried out in Argentina to evaluate the postemergence control of Italian ryegrass in wheat with new herbicides.11 The herbicides increased wheat crop yields by 21-47%.11

The Southern Cone of South America is one of the most critical regions in the world for disease epidemics of wheat.15 The region is comprised of Argentina, Bolivia, Chile, Brazil, Paraguay, and Uruguay. Serious diseases that cause epidemics and production losses include leaf rusts, powdery mildew, and fungal leaf blights (septoria leaf blotch, spot blotch, tan spot).These diseases are present every year, since normally conditions are conducive to their appearance and dissemination. In order to reduce yield losses caused by diseases, farmers are using fungicides on a regular basis.15

Foliar fungal diseases reduce wheat yield through reductions in the photosynthesis rate, increasing the rate of respiration, and decreasing translocation of photosynthates from infected tissue. Infected plants usually produce fewer tillers and set fewer grains per spike and the grains are smaller, generally shriveled and of poor milling quality.16 Leaf rust attacks all the aboveground parts of wheat plants, especially leaves, and causes numerous rusty, orange spots that rupture the epidermis on wheat leaves. Leaf rust may reduce the grain number per plant and the grain produced may be of extremely poor quality, as it may be devoid of starch.16

Wheat cultivars with an adequate genetic resistance to foliar diseases are scarce and have low levels of durability because the pathogens have a high variability and adapt to resistant cultivars quickly.16 As a result, fungicides are widely used on wheat plants to manage foliar wheat diseases in the Southern Cone.16 Seed treatments with fungicides are also usual since powdery mildew, tan spot and leaf blotch can be seed-transmitted, therefore treating seed with fungicide before planting can reduce seed-borne inoculum.16

The role of fungicidal control of disease has been of great importance in stabilizing wheat production in Paraguay.17 Research in Paraguay demonstrated that under severe disease pressure, fungicide application can result in a grain yield increase of 38-61%.17 Climatic conditions prevailing in southern Brazil are highly conducive to the development of several important fungal foliar diseases of wheat. A twelve-year study demonstrated that wheat plants sprayed with fungicide showed a mean yield increase of 40%.13 In Bolivia, more than 70% of wheat production is grown on the eastern lowlands. Environmental conditions prevailing in the humid areas of the region are very favorable for development of spot blotch. Yield losses of up to 57% have been observed. Research in Bolivia has determined that the optimum time for fungicide treatment is 15 days after the first observation of symptoms.18 In Chile, three years of research demonstrated that fungicides increased wheat yields by 12-43% through control of septoria leaf blotch.19 In a twelve-year survey of the wheat production areas of Uruguay, septoria leaf blotch was rated as the most prevalent and severe disease. Research in Uruguay has demonstrated a wheat grain increase with the best fungicide treatment of 20%.20

Leaf rust can cause wheat grain yield losses higher than 50% in severe epidemics if fungicides are not applied.21 In Argentina over 2.8 million tons of wheat were lost to leaf rust during 1948-1958- a period before the use of fungicides.22 In Argentina, the use of foliar fungicides on wheat is common, and it has increased considerably.23 Near 30% of the crop area in SE of Buenos Aires is sprayed to control foliar diseases like rust and leaf blotch.23 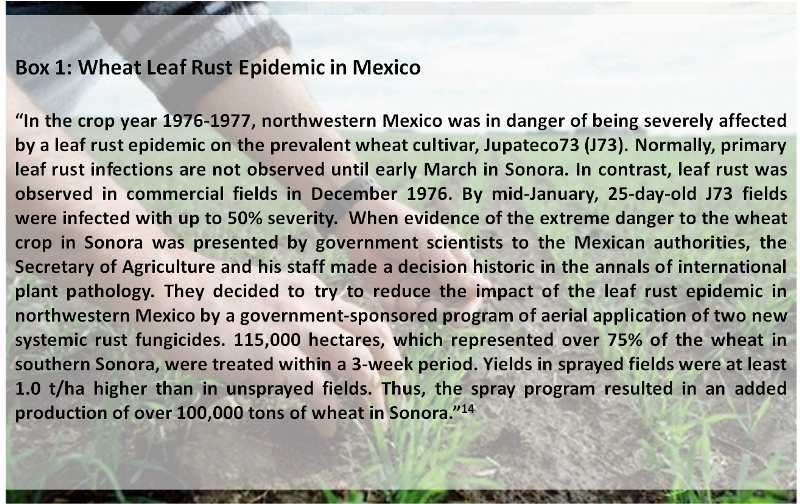 The widespread occurrence of wheat leaf rust is explained by the use of susceptible cultivars in a significant proportion of the wheat areas of Argentina, Brazil, Paraguay and Uruguay.21 Farmers continue to grow high yielding susceptible varieties using fungicides since the chemical use allows economical achievement of high yields even when requiring three fungicide applications.21

Wheat blast is a serious disease of wheat causing yield failures and significant economic losses during epidemic years. The disease was first identified in 1985 in Parana State of Brazil and has since spread to important wheat-producing regions of Brazil, Bolivia and Paraguay. Infected wheat spikes become bleached and produce small shriveled seed or none at all. Although some blast resistance has been reported in wheat cultivars, it has not been durable. Currently, wheat blast control relies heavily on the application of foliar fungicides. Because the wheat blast fungus is seed-borne, another management strategy is seed treatment with fungicides. It is critical to optimize fungicide treatments for field control of blast and for seed treatments to prevent pathogen spread. In fact, no other effective strategy is currently available for integrated management of wheat blast.12

Wheat is a very important crop in Latin America. Pesticide use has been a major factor in stabilizing wheat production in the region. Weeds are constant annual pests and an array of effective broadleaf and grass control herbicides are used to prevent yield losses. Fungal diseases are a major problem in the Southern Cone and conditions are usually favorable for disease outbreaks every year. The use of fungicides prevents major yield losses. Viral infections caused by aphids are prevalent in Andean countries and the use of insecticides to control aphids would increase wheat production in those countries.

5. Guerra-Sobrevilla, L. 1988. The Effectiviness of Carbofuran Applied to the Soil and as a Seed Treatment for the Control of Aphids in Wheat in Northwestern Mexico. Crop Protection. 7[5]:336 -337.