Organic is neither safer nor more nutritious

The director of the European Food Safety Authority talks about the differences between real risks in food and what we perceive as consumers. 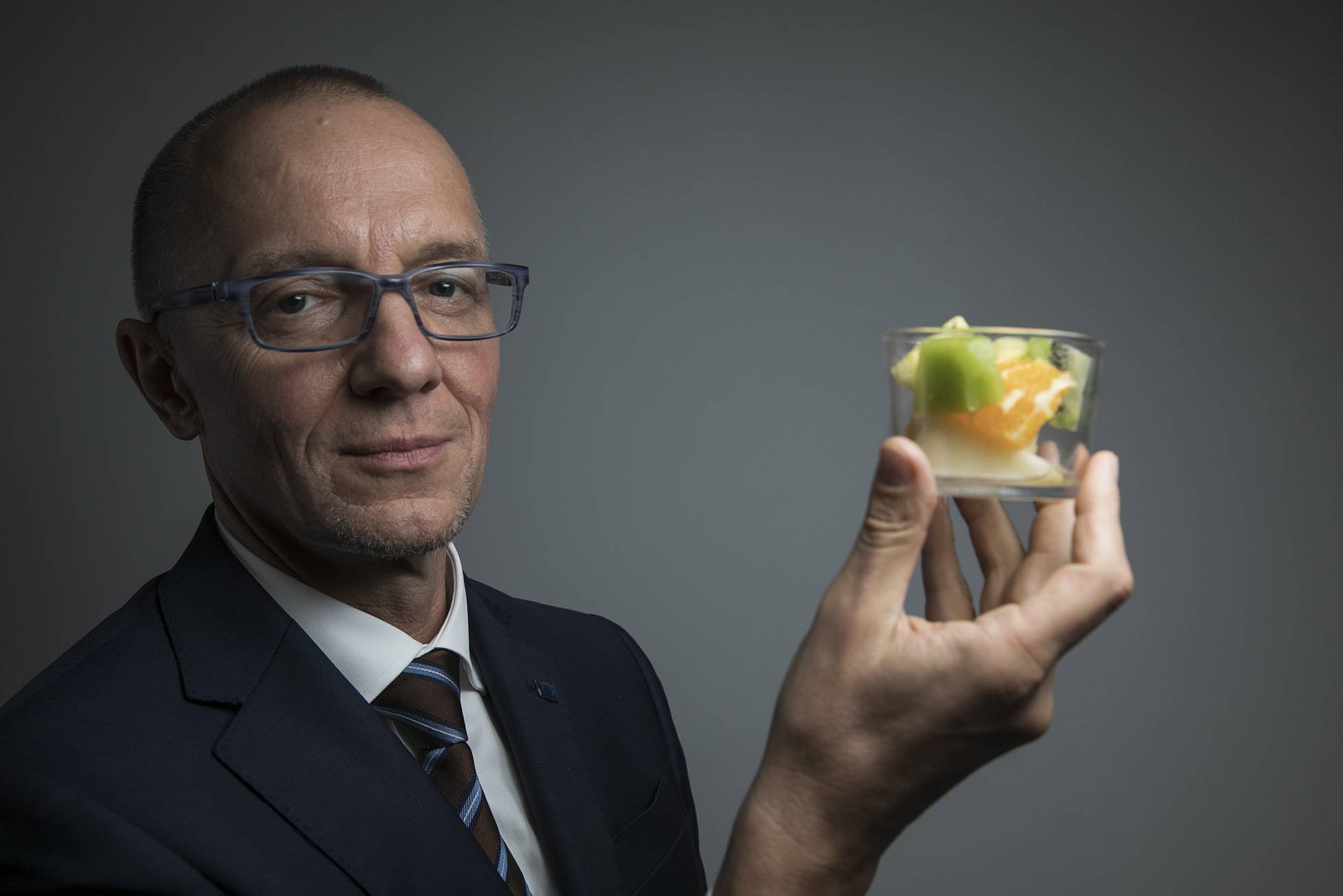 Most Spaniards believe that the main health risk associated with the food that they eat is the presence of chemicals and pesticides. And so do most citizens of the European Union, according to the latest Eurobarometer survey, published in 2010. Less than half of the population worries about excessive calorie consumption, about the obesity epidemic sweeping across the continent, or about food poisoning, “the greatest real danger,” notes Bernhard Url, executive director of the European Food Safety Authority (EFSA).

Born in Kapfenberg (Austria) in 1961, Url is a veterinarian who wanted to be a farmer but ended up specializing in food safety. Since 2014 he has been at the helm of the EU agency that issues scientific studies about pathogens, pollutants and other substances found in food to help politicians make informed decisions.

On a recent visit to Madrid to meet with Health Minister Luisa Carcedo, Url met with EL PAÍS to discuss food ethics, organic agriculture, sustainable production, and the real – and sometimes underestimated – risks lying out there.

Question. What do you eat and what don’t you eat, and why?

Answer. I eat all kinds of food. I am not afraid of eating anything because the food safety level in Europe is very high. I eat increasingly less meat because I am concerned about animal welfare and because I believe it is healthier. The way we treat animals is a reflection of the maturity of our society, and from an ethical viewpoint I think we could do better.

Q. Is it possible to combine current meat consumption levels with a more humane treatment?

A. The question is not whether we can afford to keep up the current model, but whether we want to. We will have to feed 10 billion people in the near future, and to do that at least three things are required: One, help developing countries. A lot of agricultural production gets lost through lack of infrastructure, logistics and knowledge. Second, Europe wastes 30% of food; it is an ethical scandal. Third, we need to change our eating habits. We cannot keep consuming so much animal protein. Livestock production consumes too much energy, land and water, and it produces too many emissions. My advice is: eat fewer animals and more plants. This would be healthy for people, for the planet and for the 800 million people who go to bed hungry every night because they don’t have anything to eat.

"If we question the scientific method, then we go back to the middle ages."

Q. Is that diet accessible to everyone?

A. Access to fresh products is a key social aspect. It is also a question of inequality. In the United States there are food deserts where it is impossible to find fresh food within a five-mile radius; added to this is whether people can afford it. Europe also seems to have these deserts, although this matter is not within the EFSA’s powers and we don’t have any data. Organic fruits and vegetables are more expensive and there are people who cannot afford them.

A. In terms of safety there is no difference. In terms of nutrients, probably not either. The advantages of organic agriculture are related to sustainability.

Q. Does organic agriculture have less of an environmental impact? For instance, it uses toxic copper compounds as pesticides.

A. In general the answer is yes. The way the soil is used and crops rotated is much more natural. The use of copper is something we have taken an interest in. We are seeing pollution problems caused by copper for the environment and for amphibians, birds and other organisms. It needs to be studied further.

Q. What is the biggest food problem facing Europe?

A. The excess of nutrients. Obesity. Overnutrition and malnutrition in the developed world are our biggest challenges.

Q. Should we worry about the fertilizers and chemical products in our food?

A. In Europe, all additives must be evaluated before their approval. All of the approved ones are on a list, and must be readmitted every 10 years after a new review. There is no such thing as zero risk, but in this field, the risk is very, very low. The biggest dangers lie in food poisoning from bacteria and viruses. There are possibly millions of cases each year in Europe that could be prevented with better hygiene and oversight.

Q. Are there plastics in our food? What is their effect on our health?

A. They are there, and that’s a fact. We still don’t know whether they have a toxicological impact on tissues. The European Union’s scientific advice services are working on an opinion that will be published by the end of this year.

Q. Are we seeing an increase in unfounded fears about food?

A. Yes, there is concern among citizens. They think, how can it be that my son’s urine contains [the herbicide] glyphosate? We tell them: the concentration is so low that there is no risk. And people reply: But I don’t want my children’s urine to contain any glyphosate. Which leads us to another issue: what type of agriculture do we want? Do we want pesticides or not? What are the risks and who benefits? This is a political discussion; it is not about science, but about values, about the economy. And there is another issue. Food is no longer produced in our neighbor’s yard. It comes from New Zealand, from Chile, from Canada. The complexity of the supply chains make absolute control impossible. We don’t know where our food comes from and we have to trust a complex food processing machinery. In the end, if we want to eat, we have to trust. And this is what makes people feel insecure.

Q. How can this trust be restored?

A. The industry has lost consumers’ trust. Let’s recall the case of the horse meat that was not dangerous for people’s health but still constituted deceptive practices. And then we should ask ourselves, do we need strawberries from South America, kiwis from New Zealand, and all the fruits and vegetables from the entire world available year-round? Maybe we could localize agricultural production once again. Local agriculture comes with quality seals, adequate animal treatment and more, and the industry is now trying to recover that trust through this type of quality designation.

A. I think that if we develop good programs to prevent losses after bad crops, prevent food waste in the so-called developed world, and change our eating habits, we can go far without GM food. There might be specific applications for it in the event of drought or resistance to pests, although right now I don’t see the use for it in Europe.

Q. How can we avoid so much food waste, especially in supermarkets?

A. It is a matter of attitude, of making better plans and of changing our behavior. At the farm where I grew up, not even a crust of bread ever got wasted. My mother viewed that as a sin. People who lived in Europe after World War II valued food a lot more. Why not now? It is a matter of education, of making people aware of the problem. As for the large superstores, there are laws. In France supermarkets are forced to donate soon-to-expire products to food banks. It makes no sense to send them to sub-Saharan Africa, that would not work, and in Europe we have enough low-income people: 23% of Europeans live below the poverty threshold.

Q. What pathogens are particularly worrisome?

A. The African swine fever virus, which entered the EU in 2014 and has already affected nine countries: Lithuania, Latvia, Estonia, Czech Republic, Romania, Hungary, Bulgaria and Belgium. The disease jumped 1,000 kilometers all of a sudden, from the Baltics to Belgium, probably because someone tossed a piece of contaminated meat out the car window and the wild boar got infected. This is a tremendous problem because the fever could reach the countries with the biggest pig holdings in Europe, such as Spain, France, Germany or the Netherlands.

A. In general yes. In its 15 years, the EFSA has published around 6,000 scientific opinions for the EU and around 99.9% have been taken into account by European legislators. In Europe, evidence-based politics is an important pillar of food safety. But there is reason for concern, especially on subjects like vaccines. In France, 40% of the population feels that vaccines have a toxic effect, which is disastrous. It is very dangerous to think that scientific evidence is just another opinion. If we question the scientific method, then we go back to the Middle Ages.

"No one has to fear glyphosate if it is used well"

P. What can be said to consumers about glyphosate?

R. You can tell them that if it is used well nobody has to fear. There was a discussion about whether it is carcinogenic or not. The UN agency IARC concluded that it was a carcinogenic, a view contrary to that of EFSA. But all the regulatory agencies in the world concluded the same as EFSA. Even the UN special committee dealing with pesticide residues came to the same conclusion.

P. How can we be sure that glyphosate is well used?

R. At the European level, the active substance, glyphosate, is approved in this case. Then each country approves the final product, which can be glyphosate plus other compounds, stabilizers, for example. It is the member countries that have the responsibility to study these compounds, because they can be more dangerous than the active substance. Some of the effects described in the studies analyzed by IARC could be due to these other compounds, as we emphasize in our opinion. For example, taloamine, which can be more toxic than glyphosate. The countries have a great responsibility in this aspect. In France the sale of glyphosate to consumers in supermarkets, for example, will be prohibited. If you want it, you need a license.

P. Do you feel that the industry is pressuring EFSA?

P. But the EFSA studies are financed by the industry

R. European law says that the organization that wants to approve a new product is responsible for making studies that allow experts to analyze their safety. The type of studies they have to do is also determined, they can not be the ones they want. At EFSA we sometimes make our own statistics using raw data from the industry. This is also done with cosmetics and drugs, it is not specific for food. It is the general system and I think it is very reliable.